Washington, DC—Twelve new moons orbiting Jupiter have been found—11 “normal” outer moons, and one that they’re calling an “oddball” because it’s travelling the wrong way.

This brings Jupiter’s total number of known moons to a whopping 79—the most of any planet in our Solar System.

A team led by Carnegie’s Scott S. Sheppard first spotted the moons in the spring of 2017 while they were looking for very distant Solar System objects as part of the hunt for a possible massive planet far beyond Pluto.

In 2014, this same team found the object with the most-distant known orbit in our Solar System and was the first to realize that an unknown massive planet at the fringes of our Solar System, far beyond Pluto, could explain the similarity of the orbits of several small extremely distant objects. 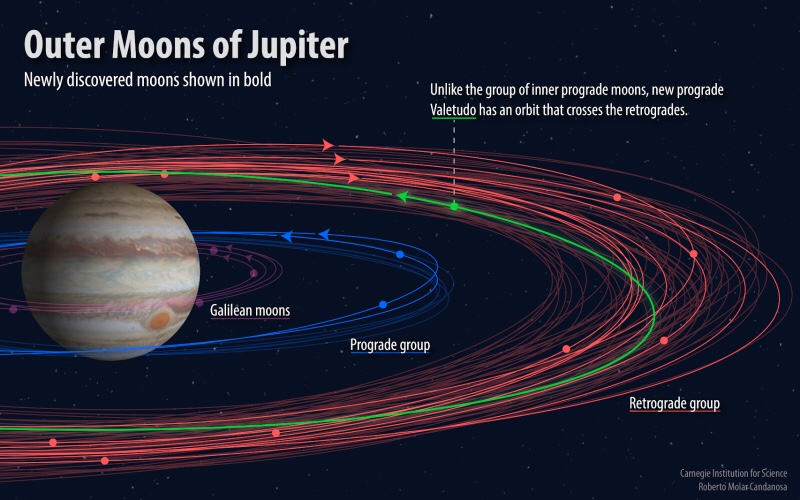 “Jupiter just happened to be in the sky near the search fields where we were looking for extremely distant Solar System objects, so we were serendipitously able to look for new moons around Jupiter while at the same time looking for planets at the fringes of our Solar System,” said Sheppard.

“It takes several observations to confirm an object actually orbits around Jupiter,” Williams said. “So, the whole process took a year.”

Nine of the new moons are part of a distant outer swarm of moons that orbit it in the retrograde, or opposite direction of Jupiter’s spin rotation.

These distant retrograde moons are grouped into at least three distinct orbital groupings and are thought to be the remnants of three once-larger parent bodies that broke apart during collisions with asteroids, comets, or other moons.

Two of the new discoveries are part of a closer, inner group of moons that orbit in the prograde, or same direction as the planet’s rotation. These inner prograde moons all have similar orbital distances and angles of inclinations around Jupiter and so are thought to also be fragments of a larger moon that was broken apart.

These two newly discovered moons take a little less than a year to travel around Jupiter.