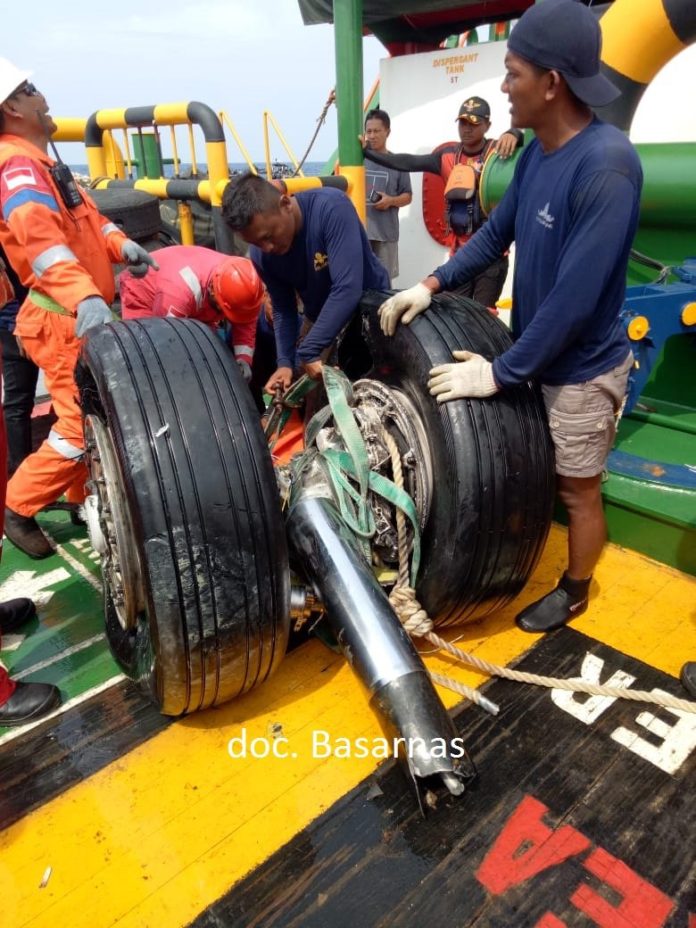 Jakarta – Indonesia search and rescue divers have found a portion of the crashed Boeing 737’s landing gear in a large debri field as well as two additional bodies.

“From the images sent by the ROV (Remotely Operated Vehicle) we see a lot of debris or plane debris. The biggest we see is a plane wheel,” the search and rescue team BASARNAS said just hours before one side of the main landing gear with two large wheels was pulled out.

The landing gear was the second major find after two divers retrieved the vital Flight Data Recorder which is key to providing information about the cause of the Lion Air Flight JT 610 crash 13 minutes after takeoff from Jakarta.

The Flight Data Recorder was immediately placed inside fresh water to prevent further corrosion. It records all functions of the aircraft including pilot inputs. The Cockpit Voice Recorder has not been found yet.

The found Recorder is on it’s way to the national transportation safety committee for analysis.

President Joko Widodo visited a a temporary search command post at a dock being used to gather material from the search.

He expressed the hope that a quick discovery of the cause would stop further aircraft accidents. Indonesia has  a bad reputation for safety.

A total of 67 body bags have been sent to a police hospital for forensic identification. 24-year-old Jannatun Dewi was the first victim identified and buried according to Islamic traditions on Wednesday.

A majority of the 189 passenger and crew on board are likely still inside a large piece of the fuselage. No one survived the crash.