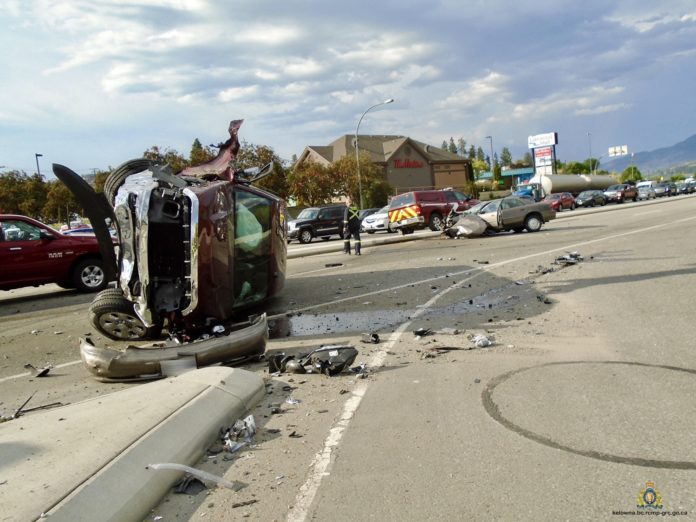 Kelowna, BC – Police are looking for people who might hace seen a terrible two-vehicle crash that landed two women in hospital.

“On August 2, 2018 at 5:28 pm, RCMP were called to assist the BC Ambulance Service, who were responding to a report of a two vehicle collision on Highway 97 at the intersection of Oceola Road in Lake Country,” said Cpl. Jesse O’Donaghey.

“The driver and sole occupant of the brown Buick sedan, an 18-year-old Vernon woman, suffered serious, however believed to be non-life threatening injuries. She was medically assessed at the scene and transported by BC Ambulance Service to hospital for treatment.

The driver of the red Dodge pickup truck, a 57-year-old woman also from Vernon, was also transported to hospital suffering from what are believed to be non-life threatening injuries.

“Her dog, who was also inside her vehicle at the time, was examined by a veterinarian and is seemingly uninjured.”

“Although no independent witnesses to the crash remained at the scene,” stated Cpl. O’Donaghey. “Our investigators believe that the driver the red Dodge pickup truck was northbound on the highway, when it collided with the brown Buick sedan travelling east through the intersection on Oceola Road.”

If you witnessed this crash and have not yet spoken to police, or you have dash camera footage that captures the collision or a portion of the collision, you are urged to contact the Lake Country RCMP at 250-766-2288.

‘My heart has stopped’ – newly married couple among 20 killed...

The strange story of a black man shot dead at his...