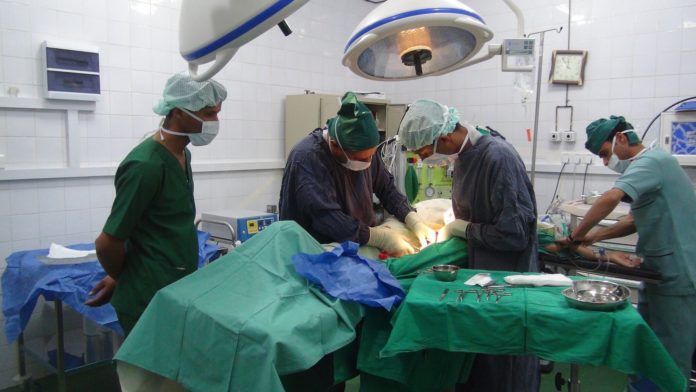 A Saudi-led coalition air strike in Yemen has taken the lives of numerous children after a bus carrying them was bombed.

At least 40 children were among a total of 51 killed, the Red Cross said. 79 are being treated. Among those are 56 kids.

The bombing by the Saudi-led coalition has ignited global outrage. Saudis said they are investigating but some are demanding an independent probe.

“This morning a bus carrying children in Yemen was attacked,” the International Committee of the Red Cross said.

“Scores of dead and wounded are being treated by our medical teams in Sa’ada after the attack in Dahyan Market,” ICRC said in a statement.

“The majority of our patients are under 10 years old.,” the Red Cross announced.

The Saudi coalition supported by the United States said the attack was justified, according to the BBC.

New figures from the ICRC-supported hospital in Sa'ada, #Yemen. Our medical team has received:

The organization Save the Children said dozens of children aged between 6 and 14 are feared dead with many more injured, after the school bus they were travelling in was hit by a suspected airstrike in the town of Dhahyan in Saada governorate in northern Yemen.

“Our staff are telling us that the students were on their way back to school from a picnic when the driver stopped to get a drink.

” The attack happened while the bus was stationary. We are unable to verify the details at this moment.

“Save the Children condemns this horrific attack and is calling for a full, immediate and independent investigation into this and other recent attacks on civilians and civilian infrastructure, including schools and hospitals.

“We have seen a worrying rise in these incidents and no action has been taken to hold the perpetrators to account.

“The capital Sanaa has also seen heavy fighting over the past 24 hours, with reports of airstrikes near our office forcing our staff to suspend all activity and seek immediate shelter.

Sylvia Ghaly, Director of Advocacy in Yemen, Save the Children, said: “This is yet another example of the blatant violations of international humanitarian law that we have seen in Yemen over the past three years – from indiscriminate and disproportionate attacks on civilians, denial of access to humanitarian aid and the use of starvation as a weapon of war – it’s the people of Yemen, not the warring parties, who are paying the ultimate price.”

“This is why we need an independent investigation into attacks on civilians so that perpetrators can be held to account.

“There is no military solution to this conflict. Only a political solution can bring the war to an end and reinstate peace in Yemen. We urge all parties to agree to an immediate cessation of hostilities, return to the negotiation table to commit to a ceasefire and cooperate with the UN Special Envoy Martin Griffiths.

The Saudi coalition has been accused of destructive air raids, which mostly seem to kill civilians. They say they do not target civilians deliberately – but the number of civilians killed in air strikes is massive and indicates recklessness and lack of care in targeting.

The coalition is fighting against Zahidi Shia Houthi fighters who the Saudis say are supported by Iran. The US, France and the UK have joined Arab gulf nations in the civil war and actively support the Saudi coalition.

UN High Commissioner for Human Rights Zeid Ra’ad Al Hussein said in February that thousands of civilians have been killed. He blamed both sides of the conflict but most have been killed in air strikes.

“The parties to this conflict are obliged to take constant care to spare the civilian population, respecting the principles of distinction, proportionality and precaution. I remind them that any intentional, direct attack against civilians or civilian objects is considered a serious violation of international humanitarian law, and that they should take all feasible precautions to avoid, and in any event, minimise, the impact of violence on civilians,” the High Commissioner said in a report earlier this year.