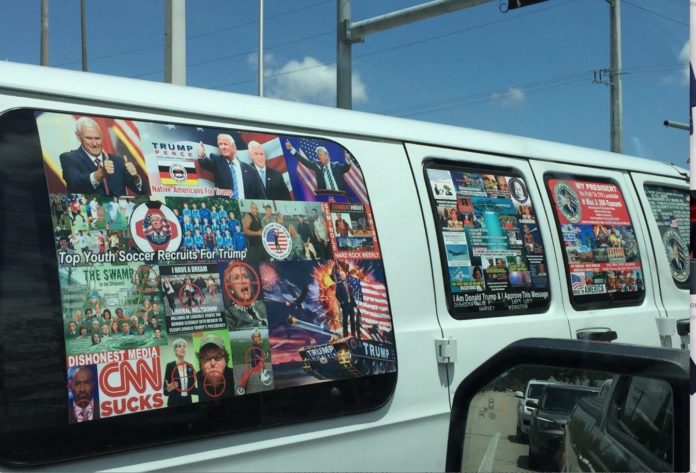 Washington, DC – A 14th parcel bomb, sent to liberal billionaire Tom Steyer has been found despite the arrest of a Trump fanatic earlier.

The Steyer package rigged with an IED was announced by the FBI Friday evening. Steyer is a former hedge fund manager and a billionaire who has given away half his money to humanitarian causes.

Cesar Sayoc, a fanatic who plastered  his van with pro-trump posters has been arrested in connection with serial mail bombs sent to democrats and their supporters..

There may still be outstandingly parcel bombs as more were tracked down on Friday.

“We have arrested Cesar Sayoc in connection with this investigation. As our investigation is still ongoing, I may not be able to answer questions about his background or about his motive,” FBI director Christopher Wray said at a joint news conference with Attorney-general Jeff Sessions.

The suspect,  a white male, worked with an all male strip tease group. His Twitter account promoted Trump and spewed hate towards those who spoke out against Trump. He has a criminal record including a previous bomb threat.

“What I can say is that this was a nationwide investigation of enormous scope and of the greatest importance. Our investigation ranged from New York to Delaware to Maryland to the District of Columbia to Florida to California.,” said Wray.

“As it always does, the FBI responded to this threat with every resource we’ve got, including our Joint Terrorism Task Forces, our Counterterrorism Division, and our world-renowned experts at the FBI Lab in Quantico.

“We can confirm that 13 IEDs were sent to various individuals across the country,” he said before the 14th was located.

“Each device consisted of roughly six inches of PVC pipe, a small clock, a battery, some wiring, and what is known as “energetic material,” which is essentially potential explosives and material that gives off heat and energy through a reaction to heat, shock, or friction. Though we’re still analyzing the devices in our Laboratory, these are not hoax devices.”

“I want to focus for a moment on the amazing work of the folks at our FBI Lab. Based on their initial analysis, they uncovered a latent fingerprint from one of the envelopes containing an IED that had been sent to Congresswoman Maxine Waters. We have confirmed this fingerprint is that of Cesar Sayoc.

“There is also a possible DNA connection between samples collected from pieces of two different IEDs, mailed in separate envelopes, and a sample previously collected from Sayoc in connection with an earlier arrest in Florida.

“Today’s arrest does not mean we’re out of the woods. There may be other packages in transit now—other packages on the way. So we need the help of everyone out there—every citizen, every law enforcement partner, everyone we’ve got—to help with this investigation in the days to come.”

“If you’ve got any information, please call us on our hotline at 1-800-CALL-FBI or online at tips.fbi.gov. No piece of information is too small; every tip could be the one that leads to something very important. And of course, if you see any suspicious activity, please call your local authorities. We need all hands on deck. We need to stay vigilant.”

14 shot on Danforth in Toronto, one woman dead, shooter is...