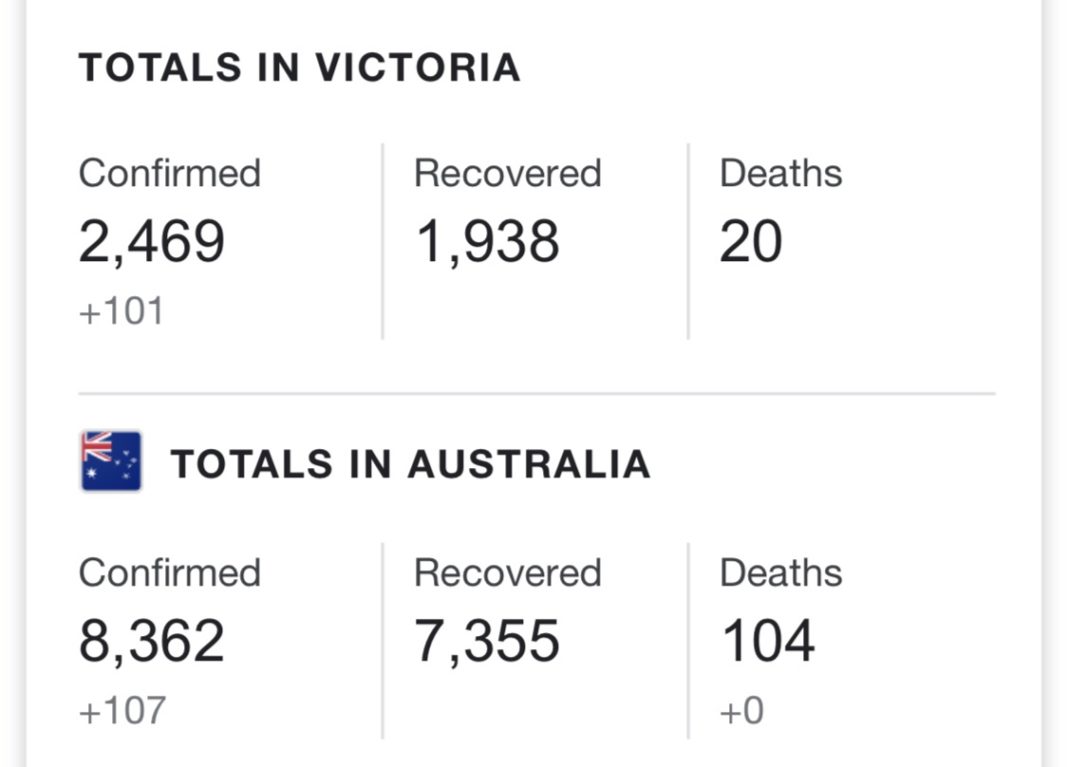 Melbourne – Australians are moving at the pace of a bullet train to contain a Covid-19 outbreak even though their total deaths during the pandemic are 104.

Australia and New Zealand are among the nations that have done remarkably well while Asia, Europe and the Americas have struggled with 100s of thousands of deaths and millions of infections – and most experts credit speed of action for the relatively good outcome.

Now the discovery of a few hundred cases in Victoria has prompted Premier Dan Andrews to lock down housing area affecting 3,000 and ordered thousands of tests. Plans are to test wider with 25,000 per day.

As of 4 July 2020, the total number of coronavirus (COVID-19) cases in Victoria is 2,469, a net increase of 101 since yesterday’s report, the state health officer reported.

• 389 cases have been acquired in Australia where the source of infection is unknown.

• In Victoria, 25 people are in hospital, including three patients in intensive care. 20 people have died, no increase since yesterday’s report. 1,938 people have recovered.

“Today’s numbers represent the second biggest increase in confirmed case since this beganand the biggest jump since 28 March,” said the premier.

“As these figures show, we are still on a knife’s edge. Rather than spread across the state, we know many of these cases are located in specific communities.”

“That means the need for targeted, swift action is stronger than ever before,” said the premier.

“In recent days, 23 cases across more than 12 households have been identified in the Remington and North Melbourne public housing estates.

“This represents a challenge we’ve not yet encountered. This is not like an outbreak spread across multiple homes or multiple suburbs,” he said in a statement.

“The close confines and the shared community spaces within these large apartment blocks means this virus can spread like wildfire.”

“And just like fire, we need to put a perimeter around it to stop it from spreading.

“It’s why, effective immediately, these estates in nine sites will be closed and contained. Residents will be required to stay inside their homes.

“Just as we’ve done with similar outbreaks in closely confined settings like aged care, the only people coming in and out will be those providing essential services.”

Cops will be stationed outside.

“This will be in place for at least the next five days, ensuring we can test every single resident. The lifting of this restriction will be determined by our success in testing and tracking this virus.

“Residents will be supported with onsite clinical care, as well as food delivery and care packages.”

“For residents in these postcodes, the message is clear: stay at home.”

There’s only four reasons to be out. Again, shopping for food and essential items. Care and caregiving. Exercise.

Work and study if you can’t do it from home.

“We need people to abide by them. To follow the rules. To listen to the advice.

“This virus is dangerous.It’s indiscriminate. And it has the potential to undo everything that’s been achieved.

We all have to dig deep to make this work.

To those residents going into local lockdown from midnight tonight – thank you in advance for what you’re about to do.

It's not easy. Not without sacrifice. But it is necessary.

“I know many Victorians are feeling anxious and unsure,” said the Labour party premier.

“Today we begin our Suburban Testing Blitz, our plan to ensure we have all the information and insights we need. This targeted blitz across ten priority suburbs represents one of the biggest testing efforts ever.

“Over the next 10 days, residents of these suburbs will receive free testing with or without symptoms.”

“Our aim is to do 10,000 tests a day across these areas and in the top two priority suburbs Keilor Downs and Broad meadows we want to reach half the population in the next three days.”

A team made up of 800 testers will zero-in on community transmission with a fleet of mobile testing vans allowing people to not only get tested in their own community, but in their own street.

“We’re asking locals in these areas particularly if you have symptoms please come forward and get tested. See it as your civic duty. See it as your contribution to keeping your local area and our whole community safe.”

Our squad of more than 1 000 doorknockers will also continue their outreach, going door to door to ensure locals have the latest health advice.

Right now, pathologists in Victoria can process up to 18,000 tests a day. But using neighbouring state’s to boost testing to 25,000 per day..

• Of the total 2,469 cases, there have been 2,119 in metropolitan Melbourne and 256 in regional Victoria. Several cases remain under investigation.

The overall total has increased by 101, with seven case reclassified.

There have been no new deaths reported. To date, 20 people have died from coronavirus in Victoria.

Melbourne under curfew, State of Disaster in Victoria