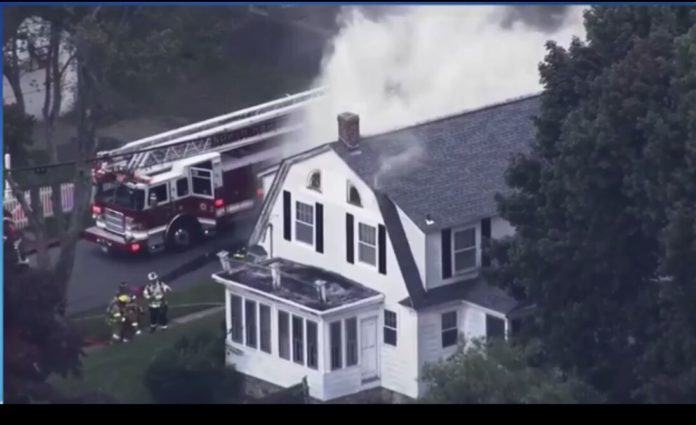 Lawrence, Massachusetts – People are fleeing from spontaneous explosions and fires in Lawrence and Andover.

At least 70 structures including numerous homes erupted in flames.

Leaking gas from possibly ruptured supply lines are initially blamed for the torching of dozens of structures that just erupted in flames.

Thick clouds of smoke, the smell of natural gas and clogged traffic are adding to the chaos.

“Spread over wide swath of south Lawrence and northern part of North Andover with several others across Merrimack River in north Lawrence,” police said. (See map below)

Lawrence Mayor Dan Rivera has asked all customers who are supplied by Columbia gas company to evacuate from South Lawrence.

Power is being shut down in all areas of Lawrence and Andover areas to prevent ignition from over-pressurized gas lines.

There are reports of several serious injuries from the fires.

Responding to suggestion someone hacked the supply company, police responded: “Far too early to speculate on cause. Joint investigation will be conducted when situation is stabilized..”

Columbia Gas of Massachusetts had not commented on the cause of the explosions. It had planned to modernize underground pipelines. It’s not known if the work had begun.

‘I love my husband with all my heart’ says Cindy McCain...