Miami, Florida – Winds and flooding have hit a wide area of North Carolina with 68,000 already without power ahead of gigantic hurricane Florence.

Streets in some towns are flooded and there are reports of trees down and river banks overflowing.

The hurricane has slowed in its forward motion towards land but hurricane force winds are fanning out up to 80 miles from the eye. Sustained winds are 100 mph.

Outer rain bands of monster hurricane Florence are approaching the coast of North Carolina and the national hurricane center continues to warn of life-threatening storm surge and rainfall.

The wind speed has declined as the hurricane moves at 15 mph on a course of 315 degrees towards land.

An Air Force Hurricane Hunter aircraft also reported that the eyewall was not fully intact on its last pass through the storm. The Air Force plane measured a peak 700-mb flight level wind of 102 kt.

These data suggest that the intensity may be slightly lower, but the initial intensity has been maintained at 95 kt, since the plane may not have sampled the strongest winds., the center said.

“However, given the current storm structure, little overall change in strength is anticipated as Florence approaches the coast. Gradual weakening should occur as the hurricane interacts with land in 24-36 hours, with a faster rate of weakening predicted once Florence moves farther inland.”

“Aircraft and satellite wind data show that Florence is a large hurricane. Life-threatening storm surge, heavy rainfall, and damaging wind will cover a large area regardless of exactly where the center of Florence moves,” forecasters warned.

1. A life-threatening storm surge is now highly likely along portions of the coastlines of South Carolina and North Carolina, and a Storm Surge Warning is in effect for a portion of this area. All interests in these areas should complete preparations and follow any advice given by local officials.

2. Life-threatening, catastrophic flash flooding and prolonged, significant river flooding are likely over portions of the Carolinas and the southern and central Appalachians late this week into early next week, as Florence is expected to slow down as it approaches the coast and moves inland.

3. Damaging hurricane-force winds are likely along portions of the coasts of South Carolina and North Carolina, and a Hurricane Warning is in effect. Strong winds could also spread inland into portions of the Carolinas.

4. Large swells affecting Bermuda, portions of the U.S. East Coast, and the northwestern and central Bahamas will continue this week, resulting in life-threatening surf and rip currents.

STORM SURGE: The combination of a dangerous storm surge and the tide will cause normally dry areas near the coast to be flooded by rising waters moving inland from the shoreline. The water has the potential to reach the following heights above ground if peak surge occurs at the time of high tide.

“The deepest water will occur along the immediate coast in areas of onshore winds, where the surge will be accompanied by large and destructive waves. Surge-related flooding depends on the relative timing of the surge and the tidal cycle, and can vary greatly over short distances.”

RAINFALL: Florence is expected to produce heavy and excessive rainfall in the following areas.

WIND: Hurricane conditions are expected to reach the coast within the hurricane warning area this evening or early Friday. Winds are expected to first reach tropical storm strength by later this morning or early this afternoon, making outside preparations difficult or dangerous. Preparations to protect life and property should be nearing completion.

TORNADOES: A few tornadoes are possible in eastern North Carolina through Friday. 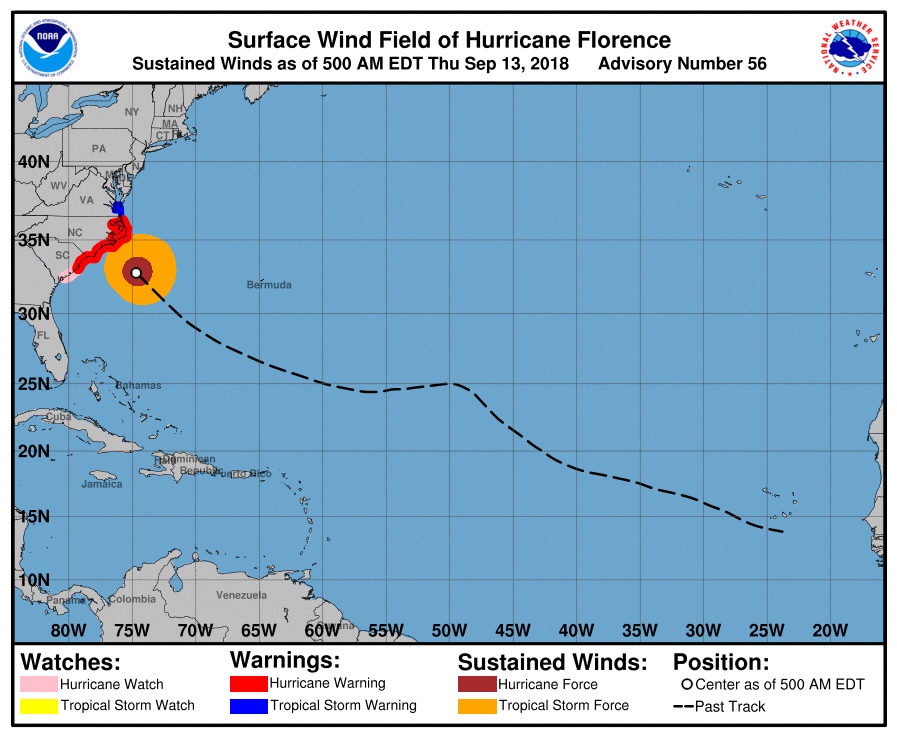 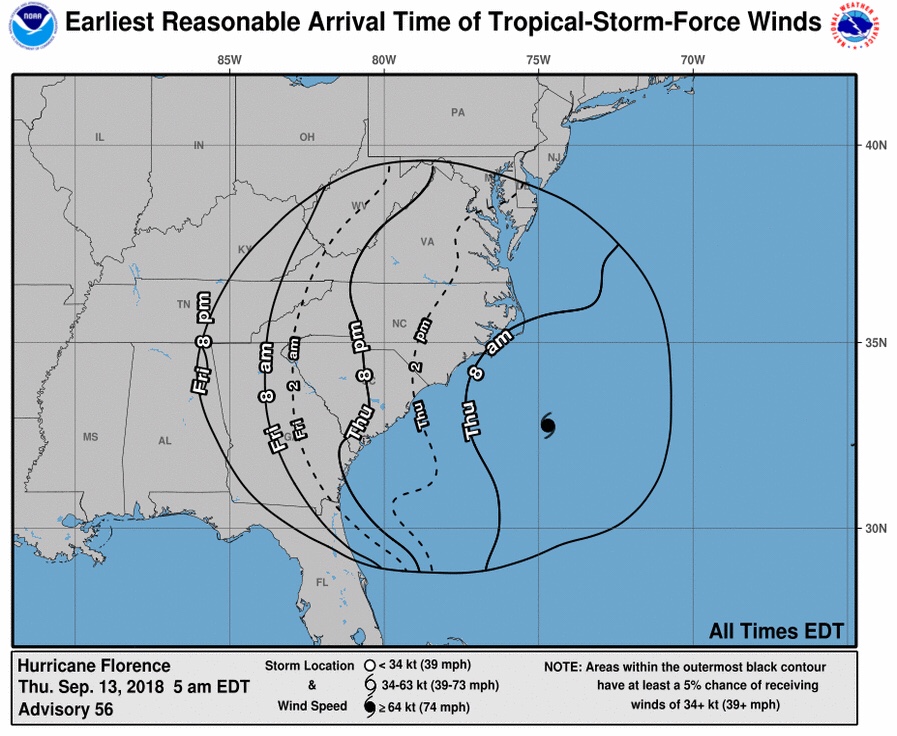