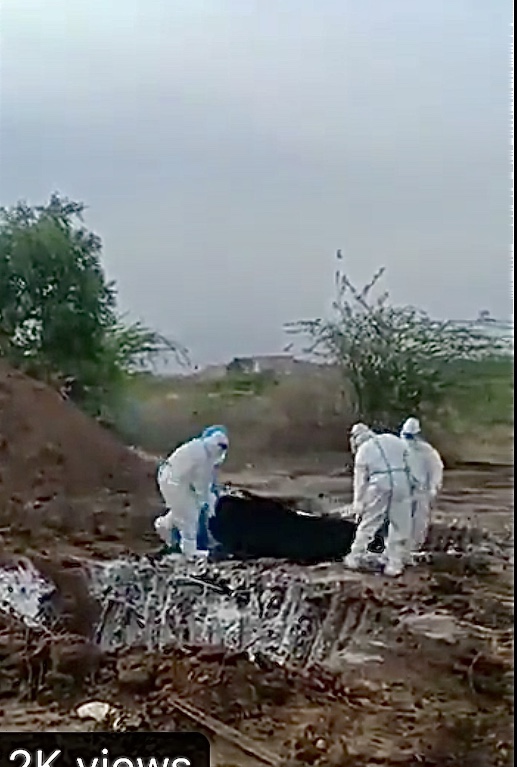 Bangalore – Indians are shocked and outraged after a video surfaced on social media showing PPE-clad men throwing bodies of Covid-19 victims into a large pit.

The video shows bodies wrapped in black garbage bags being removed from a van and dragged or carried and then hurled into a deep pit. According to Indian media the men are heard talking about how to carry out the dumping.

A bulldozer is seen nearby.

A Karnataka state official issued a media statement apologizing over the disrespect with which the victims were treated.

It's disturbing to see bodies of COVID patients who have died being dumped inhumanly into a pit in Ballari.

Is this civility? This is a reflection of how the govt has handled this Corona crisis.

I urge the govt to take immediate action and ensure that this doesn't happen again. pic.twitter.com/lsbv5ZUNCR

A district commissioner, S S Nakul, said in a statement published by several media outlets that: “The District Administration regrets the incident and hereby unconditionally apologizes for this incident to the families of the departed in particular..”

He said the team that dragged and hauled bodies into the pit has been fired. 8 bodies were buried and covered with dirt.

The country had been reporting a surge in new cases every day.

States like Karnataka and Telangana which were previously showing improvement have seen a surge of new cases as well.

The Indian state of Maharashtra is leading in numbers with 169,883 cases. 7,610 people have lost their lives.

Maharashtra has extended a lockdown to 31 July 2020 and has further increased restrictions in the lockdown period. Mumbai is the capital of this state – financial hub as well as Bollywood.

Maharashtra recently tried to ease restrictions, but the cases only spiralled up.

Negligence on social distancing in dense major cities in the country contributed to the spread of the disease.

India has a population of 1.3 billion.

– Ravi Matah is a correspondent for Vancouverite. He writes for several community papers.