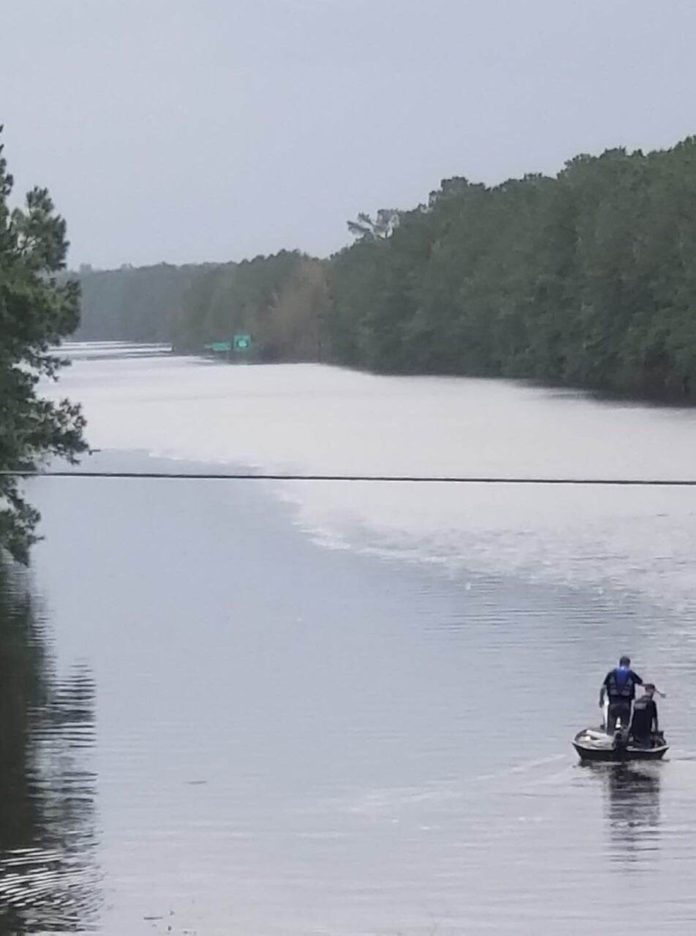 Wilmington, NC – Rising floodwaters have turned Interstate 40 into a river along with hundreds of other roads.

Cities are cut off, hundreds of thousands are without power and a total of 32 have died in three states, 25 of them in North Carolina.

Some of the dead are children.

25 deaths in North Carolina are from drowning, electrocution, falling trees and collapsing structures. 6 deaths are reported in South Carolina while Virginia reports one dead.

These deaths are not from winds but rising water levels from the rainfall unleashed by Florence and overflowing rivers.

At least two dams are in danger of collapsing. And the worst is not over.

The flooding on Interstate 40 – the third longest freeway in the US – made a top official of North Carolina department of transport exclaim: ‘This is not a river, this is Interstate 40.”

This isn't a river…this is Interstate 40. @NCAviation captured this drone footage today as part of damage assessment near mile marker 387 in Pender County. This illustrates our message that travel in this area is impassable and unsafe. #FlorenceNC pic.twitter.com/28Ok6Tjpcu

Rescuers face heartbreaking tasks as they race to find adults and children swept away by floods. Often they fail to save a life, leaving some rescuers sobbing.

One such failure was Kaiden Lee-Welch. He was with his mother when their car sank in a ditch.

“Thus far, he has not been located and search activities will resume this morning.”

“Union County Sheriff’s detectives believe the child and his mother were traveling east on N.C. 218 going toward Wadesboro.

“The mother drove around the barricades on N.C. 218 and continued traveling east until her vehicle encountered rushing water flowing across the road.”

“Her vehicle left the roadway and came to rest amongst a group of trees. She managed to free herself and Kaiden, who was in a car seat, but lost her grip on him in the rushing water.”

Among the hazards are pollution from farms, mining waste buried and then unearthed by floods as well as tornadoes.

Wilmington, a city that now is marooned recorded 86.79 inches of rainfall so far in 2018. This smashes a whole year’s rainfall record set in 1877 when there was a total 83.65 inches of rain.

“Sadly, this is a record we would have been happy not to break this quickly,” the national weather service said.

Woody White, chairman of the board of commissioners of New Hanover County, said officials were planning for food and water to be flown into Wilmington – the coastal city of nearly 120,000 people.

The latest is that one road into the city is open but the route is being kept a secret to avoid jamming it up.

“Our roads are flooded [by Florence],” said White. “There is no access to Wilmington.”

Out of state drivers have been told not to enter North Carolina.

Damage to homes and businesses is likely to top $20 billion. That does not include road repairs, power lines, and cleanup of debris.

Governor Roy Cooper said: “This is an epic storm that is still continuing; the rivers are still rising; some have not seen the worst flooding. This is a monumental disaster for NC that affects many of our people.”