Seattle – 770,000 lives could be saved between now and New Year’s Day with masking and social distancing.

That is the projection being made by the University of Washington-based Institute for Health Metrics and Evaluation (IHME.)

“Cumulative deaths expected by January 1 total 2.8 million, about 1.9 million more from now until the end of the year. Daily deaths in December could reach as high 30,000.”

“These first-ever worldwide projections by country offer a daunting forecast as well as a roadmap toward relief from COVID-19 that government leaders as well as individuals can follow,” said IHME Director Dr. Christopher Murray.

“We are facing the prospect of a deadly December, especially in Europe, Central Asia, and the United States.

“But the science is clear and the evidence irrefutable: mask-wearing, social distancing, and limits to social gatherings are vital to helping prevent transmission of the virus.”

• A “worse case” in which mask usage stays at current rates and governments continue relaxing social distancing requirements, leading to 4.0 million total deaths by the end of the year;

• A “best case” of 2.0 million total deaths if mask usage is near-universal and governments impose social distancing requirements when their daily death rate exceeds 8 per million; and

• A “most likely” scenario that assumes individual mask use and other mitigation measures remain unchanged, resulting in approximately 2.8 million total deaths.

The references to 750,000 lives saved and 30,000 daily deaths in December represent the differences between the “best case” and “most likely” scenarios.

“Each of these scenarios represents a significant increase over the current total deaths, estimated at nearly 910,000 worldwide. The increase is due in part to a likely seasonal rise in COVID-19 cases in the Northern Hemisphere.

“To date, COVID-19 has followed seasonal patterns similar to pneumonia, and if that correlation continues to hold, northern countries can anticipate more cases in the late fall and winter months.

“People in the Northern Hemisphere must be especially vigilant as winter approaches, since the coronavirus, like pneumonia, will be more prevalent in cold climates,” Murray said.

Murray highlighted the unprecedented opportunity to save lives with rapid action.

“Looking at the staggering COVID-19 estimates, it’s easy to get lost in the enormity of the numbers,” Murray said. “The number of deaths exceeds the capacity of the world’s 50 largest stadiums, a sobering image of the people who have lost their lives and livelihoods.”

Under the most likely of IHME’s scenarios, the nations with the highest per capita total deaths would be the US Virgin Islands, the Netherlands, and Spain. By WHO region, this scenario projects 959,685 total deaths by January 1 in the Region of the Americas, 667,811 in the European Region, 79,583 in the African Region, 168,711 in the Eastern Mediterranean Region, 738,427 in the South-East Asia Region, and 191,598 in the Western Pacific Region.

“We all must learn from those leaders of nations where the virus has been contained, or where second waves of infections have occurred, and where swift action has been taken to prevent loss of life,” Murray said.

He also cautioned against pursuing the so-called “herd immunity” strategy, which occurs when a large proportion of a community becomes immune to the virus through infection and recovery. The “worse-case” scenario in these projections reflects a situation where leaders allow transmission to run through their population, resulting in significant loss of life.

“This first global forecast represents an opportunity to underscore the problem with herd immunity, which, essentially, ignores science and ethics, and allows millions of avoidable deaths,” Murray said. “It is, quite simply, reprehensible.” 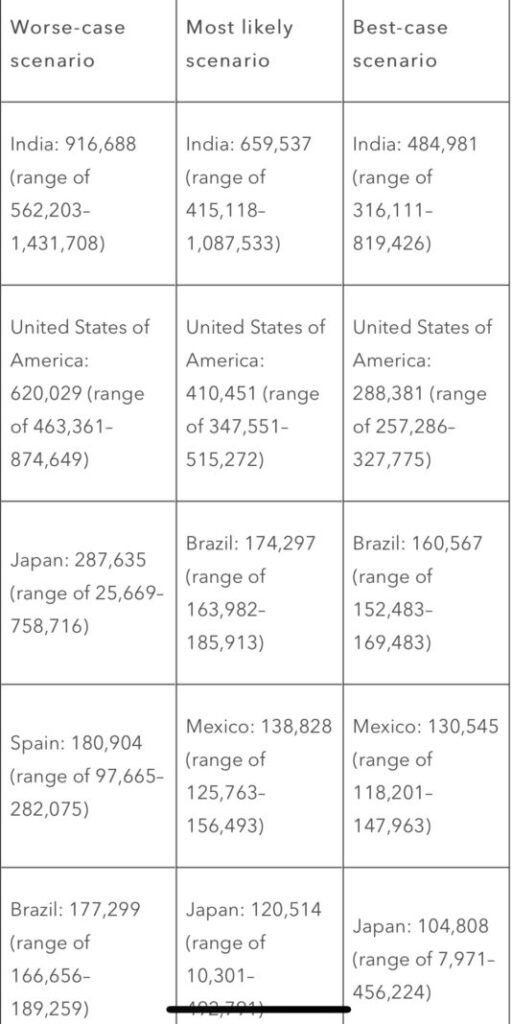