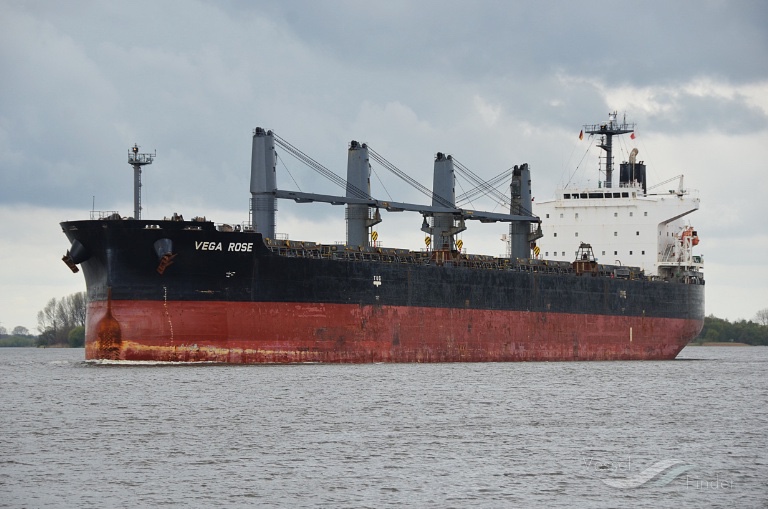 Delta, BC – A massive cargo ship is stuck at Delta Port after its captain and six crew members reported being ill – and a total of 7 are believed positive for Covid-19.

The 192-metre bulk carrier Vega Rose has been stuck in port for 4 days and the gangway has been sealed to prevent disembarking or getting on, said a port worker.

How many crew, if any, remain locked inside the ship is not clear. The ship is at berth 2 at Westshore terminal.

“This is a terrible situation for the crew. I am hoping that everyone involved has a speedy recovery and there are no further incidents aboard the vessel,” said Rick Hurtubise, president of local 502 of the International Longshore & Warehouse Union

“On September 3 around 8:30 a.m. the hall was notified that the Vega Rose docked at Westshore Terminals at 3:30 a.m.

“The pilot bringing the ship in reported that the captain of the vessel had a sore throat and stomach pains,” said Hurtubis.

“Transport Canada and PHAC were notified and the captain was taken off the ship.

“At that time, Westshore said that nobody is to come on or off the vessel and they taped off the gangway.”

“On September 4 at 11:30 a.m. Westshore Terminals advised that the captain had tested positive for COVID-19 and they were going to test the rest of the crew. Still, nobody was to go on or off the vessel.”

Westshore Terminals is working with Transport Canada and Public health Canada to try and get the vessel out of the terminal and out to anchor.

The ship is registered in Panama but shipping logs online show the vessel was in Indonesia in July and then sailed for South Korea.

The vessel left the South Korean port of Gwangyang on Aug. 17 and anchored at English Bay on Sept. 2.

It’s possible the captain and crew picked up Covid-19 in South Korea where there has been a surge in cases in recent days.

A new master has been flown in and Westshore Terminals has hired a sanitizing company to clean the whole ship.

“They will be calling in a pilot to take the ship out. If the pilot or new master cannot board the ship, then they may use the tugs to pull it to anchor,” the union said.

Transport Canada could not be reached at night to determine if any crew member has been hospitalized or whether crew is isolating in Vancouver area.

There’s no word on the nationality of the crew.