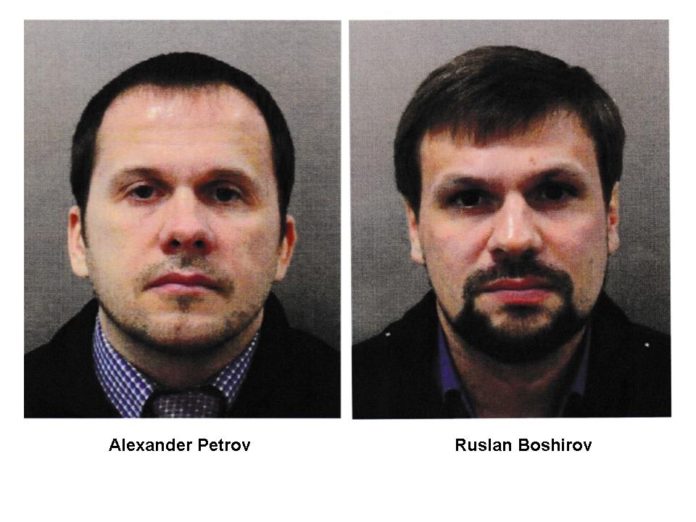 London, UK – Two Russians flew into London aboard an Aeroflot flight with a mission to kill a former spy.

They came armed with Novichok, concealed inside a bottle of perfume. They carried out surveillance and then struck. They left once they thought their mission was accomplished. It took only two days.

Now, the UK is hunting the pair throughout Europe but the UK will not ask Russia to extradite them since Russia has previously declined to send back suspects.

“During the weekend of 4 March 2018 in Salisbury the former Russian spy Sergei Skripal and his daughter Yulia were poisoned with a military-grade nerve agent of a type developed by Russia, part of a group of nerve agents known as ‘Novichok’,” said Sue Hemming, Director of Legal Services, for the Crown Prosecution Service.

“A police officer, DS Nick Bailey, who was involved in searching the Skripal’s home address after this attack, was also poisoned with the same nerve agent,” she said.

Two suspects identified and charged in relation to #Salisbury attack. Images released and appeal for anyone who may have seen the suspects to contact police: 0800 789 321 Salisbury2018@met.police.uk @terrorismpolice

“The Counter Terrorism Policing Network has conducted a thorough investigation into how this attack happened.

“They have recently submitted a file of evidence to the Crown Prosecution Service so we could make a decision whether criminal charges could be brought against anyone who was involved in these events.

“Prosecutors from CPS Counter Terrorism Division have considered the evidence and have concluded there is sufficient evidence to provide a realistic prospect of conviction and it is clearly in the public interest to charge Alexander Petrov and Ruslan Boshirov, who are Russian nationals, with the following offences: 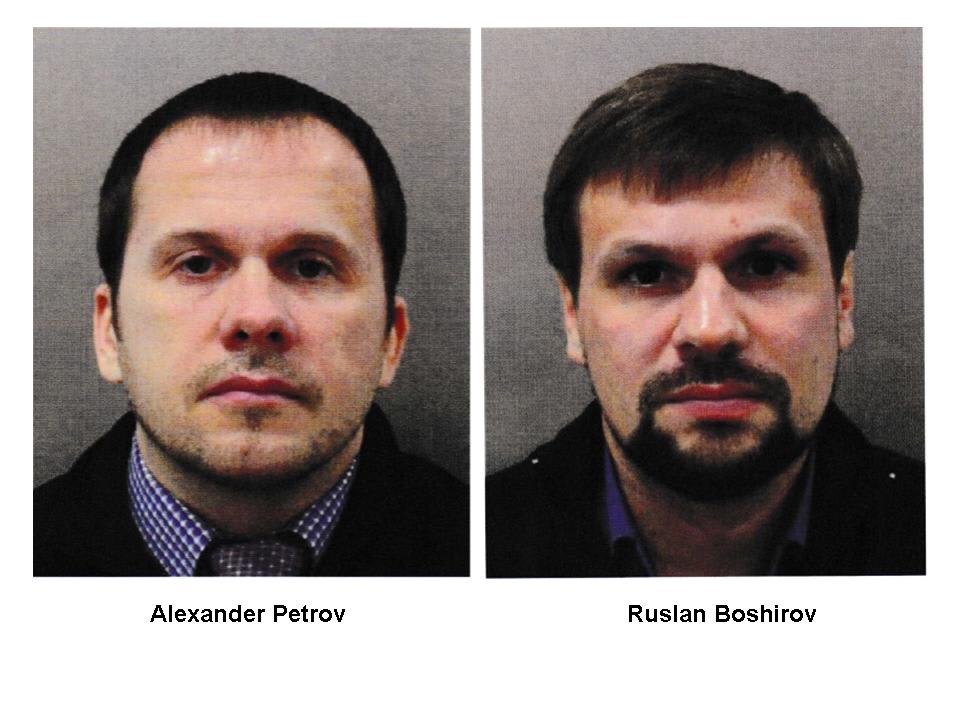 •    Use and possession of Novichok contrary to the Chemical Weapons Act

“A realistic prospect of conviction means the CPS is satisfied on an objective assessment that the evidence can be used in court and that an objective, impartial and reasonable jury hearing the case, properly directed and acting in accordance with the law, is more likely than not to convict these two individuals of the charges. It is of course for a jury to decide whether the evidence is enough for them to be sure of the suspects’ guilt.

“We will not be applying to Russia for the extradition of these men as the Russian constitution does not permit extradition of its own nationals. Russia has made this clear following requests for extradition in other cases.

“Should this position change then an extradition request would be made.”

“We have, however, obtained a European Arrest Warrant which means that if either man travels to a country where an EAW is valid, they will be arrested and face extradition on these charges for which there is no statute of limitations.”

“I will now go through their movements in detail:

At 3pm on Friday, 2 March, the suspects arrived at Gatwick airport, having flown from Moscow on Aeroflot flight SU2588.

From there it is believed that they travelled by train into London, arriving at Victoria station at approximately 5.40pm.

They then travelled on London public transport to Waterloo station and were in the area between approximately 6pm and 7pm. They travelled to the City Stay Hotel in Bow Road, East London, where they stayed on Friday, 2 March, and Saturday, 3 March.

They are believed to have taken a similar route when they returned to London on the afternoon of Saturday, 3 March. Leaving Salisbury at approximately 4.10pm and arriving in Bow at approximately 8.05 pm.

We assess that this trip was for reconnaissance of the Salisbury area and do not believe that there was any risk to the public from their movements on this day.

On Sunday, 4 March, they made the same journey from the hotel, again using the underground from Bow to Waterloo station at approximately 8.05am, before continuing their journey by train to Salisbury.

CCTV shows them in the vicinity of Mr Skripal’s house and we believe that they contaminated the front door with Novichok.

From Heathrow Airport, they returned to Moscow on Aeroflot flight SU2585, departing at 10.30pm on Sunday, 4 March.

We have no evidence that they re-entered the UK after that date.

Having taken advice from Public Health England, we are confident that there was no risk to members of the public who were on the same flight, trains or public transport used by the suspects.

On 4 May 2018, tests were carried out in the hotel room where the suspects had stayed. A number of samples were tested at DSTL at Porton Down. Two swabs showed contamination of Novichok at levels below that which would cause concern for public health. A decision was made to take further samples from the room as a precautionary measure, including in the same areas originally tested, and all results came back negative. We believe the first process of taking swabs removed the contamination, so low were the traces of Novichok in the room.

Following these tests, experts deemed the room was safe and that it posed no risk to the public.

In terms of those who stayed in the room between 4 March and 4 May; to-date, we have had no reports of any persons falling ill. It is likely, given what we have learnt from this investigation, that anyone exposed to Novichock will have experienced symptoms within 12 hours of exposure. The levels of Novichok we found in the room at the time of police sampling in May were such that they were not enough to cause short or long-term health effects to anyone exposed to it, at that point or thereafter. We will continue to work closely with Public Health England as new information comes to light.

We are asking anyone who stayed at the hotel between 4 March and 4 May to call 0800 789 321 or email Salisbury2018@met.police.uk. Staff from PHE will be on hand to give advice and reassurance.

To help understand the suspect’s movements as fully as possible, we are releasing a selection of CCTV images that clearly show the men and the clothing they were wearing over the weekend of 3 and 4 March.

The public may remember it was a particularly cold weekend and there was heavy snow in Salisbury.

The first CCTV image (timed at 16.22 on Friday 2 March) shows the man we know as “Petrov” arriving at London Gatwick airport.

Image three, shows the suspects at 16.11 on Saturday, 3 March at Salisbury train station about to catch a train back to London.

Image four captures the suspects at 11.48 on Sunday 4 March having returned to Salisbury. Here they are seen exiting Salisbury railway station.

Image five shows the suspects ten minutes later – at 11.58 – on Wilton Road, Salisbury, we say, moments before the attack.

At 13.05 on Sunday, 4 March, the suspects are caught on CCTV (image six) in Fisherton Street, in Salisbury town centre, heading towards the train station.

Image seven is a rear shot of the suspects in Fisherton Street minutes later, at 13.08 on Sunday, 4 March.

Image eight shows the suspects at Salisbury train station at 13.50 on Sunday, 4 March, as they embark on their journey back to London – “Boshirov” is in the foreground and “Petrov” at the rear.

In image nine, we see the suspects passing through passport control at London Heathrow at 19.28 on Sunday evening (4 March) – in the image, “Petrov” is at the front and “Boshirov” at the back.

Did you see these suspects between Friday 2 March and Sunday 4 March? Do you recognise or know them? If so please call police on 0800 789 321 or email the investigation team at Salisbury2018@met.police.uk

Detectives continue to work around the clock to fully understand the circumstances in which Dawn and Charlie were contaminated.

Detailed and systematic searches have been conducted at a number of sites in Salisbury, Amesbury and London.

Officers have interviewed Charlie a number of times about his recollections prior to falling ill.

Charlie told police he found a box he thought contained perfume in a charity bin on Wednesday, 27 June. Inside the box was a bottle and applicator. He tried to put the two parts together at his home address on Saturday, 30 June, and in doing so got some of the contents on himself. He said Dawn had applied some of the substance to her wrists before feeling unwell.

After Charlie told police where he found the box, cordons were put in place and two bins behind shops in Catherine Street, Salisbury, were removed.

Previously, during a search of Charlie’s home address in Muggleton Road on 10 July a small box labelled as Nina Ricci Premier Jour was recovered from a rubbish bag in the kitchen. On 11 July a small glass bottle with a modified nozzle was found on a kitchen worktop. Tests undertaken at DSTL established the bottle contained a significant amount of Novichok.

We cannot account for the whereabouts of the bottle, nozzle or box between the attack on the Skripals on 4 March and when Charlie Rowley said he found it on Wednesday, 27 June.

Did you see this pink box or glass bottle during that time? Do you have any information about where it might have been discarded? If so, please contact the investigation team on 0800 789 321 or Salisbury2018@met.police.uk.

We must continue to build as comprehensive a picture as we can to reassure the public and secure a future prosecution through the UK criminal justice system. Any extra information from the public will be extremely welcome.

In summary, I am asking for the public’s help worldwide and I want to restate the following appeal points:

• Do you recognise the men from the CCTV or do you know them?

• Did you see them while they were in the UK and in particular during their time in Salisbury?

• Has anyone seen the bottle or box between the attack on the Skripals on Sunday, 4 March to when Charlie says he found it on Wednesday, 27 June? This is vital information.

Tampa mom charged with murder after throwing girl, 4, into river