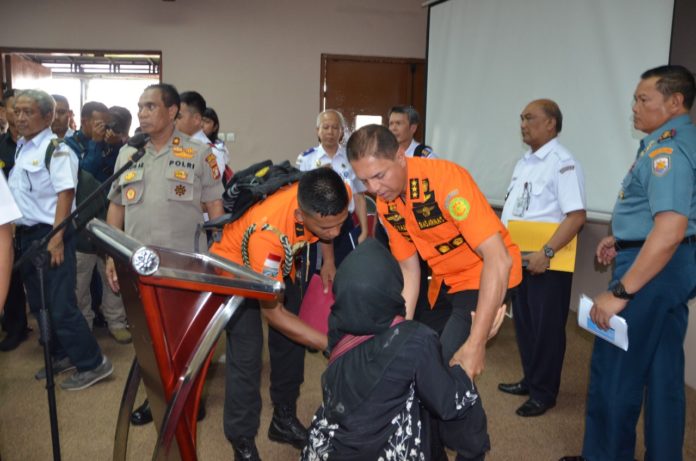 Jakarta – Emotional relatives are begging the Indonesian search and rescue agency not to stop looking for loved ones who died in the crash of Lion Air Flight JT-610.

One distraught mother fell to her knees at the feet of Muhammad Syaugi, commander of the national SAR team (BASARNAS) begging for the body of her child to be found.

BASARNAS had said earlier that it would discontinue the search in three days but emotional relatives demanded a continuation until all 189 on board are accounted for. 138 body bags with parts have been taken for identification.

But fewer than 20 individual passengers have been identified. And the team has not found any major fuselage piece or the Cockpit.

The divers and 40 ships have managed to recover one engine, landing gear wheels and the flight data recorder but not the cockpit voice recorder which may have sunk in several feet of mud at the bottom of the sea. The aircraft smashed into the water seven days ago after an apparent malfunction. The wreckage is scattered 100-feet below the surface.

The emotions surfaced at a meeting of relatives at the Ibis Hotel in Jakarta on Monday where briefings were given by several top officials from government and the SAR team head.

At one point Muhammad Syaugi, head of BASARNAS, choked up while stating that he’ll try his best to find all the missing from the crash.

“We understand that we are not superhuman, not perfect human beings. We are still trying our best with what we have, we are sure we can evacuate all victims. Mother, ..,” he said, tearing up and looking down as the room fell silent.

“Every day I see, … I am in the field, at sea, … sorry, I am seriously carrying out this search operation, I do not give up, …” he said after wiping his tears.

“Hopefully, with this time, we will remain all out. Even if it is up to ten days later, if there is still a possibility to be found, I am sure, that I will continue to look for my brothers. I ask for your prayers, for all of us, we are strong, to carry out these noble tasks. Thank you,”

A statement issued by BASARNAS said a woman later fell to her knees asking that her child be found.

33 body bags were filled with human remains on day 7 of the search. Many of these were found on the beach.

“The findings of the seventh day yesterday were quite significant, namely 33 bags of bodies. Apart from the seabed, victims were also found on the coast of Tanjung Pakis Beach. Therefore, the operation was also carried out with sweeping on the coast.”

“To be sure, all the SAR teams involved in this operation, remain enthusiastic, remain optimistic that they can find other victims,” ​​said Deputy Basarnas Operations and Preparedness Division, Maj. Gen. TNI Nugroho Budi Wiryanto.

‘My heart is broken’ – Cindy McCain on passing of her...