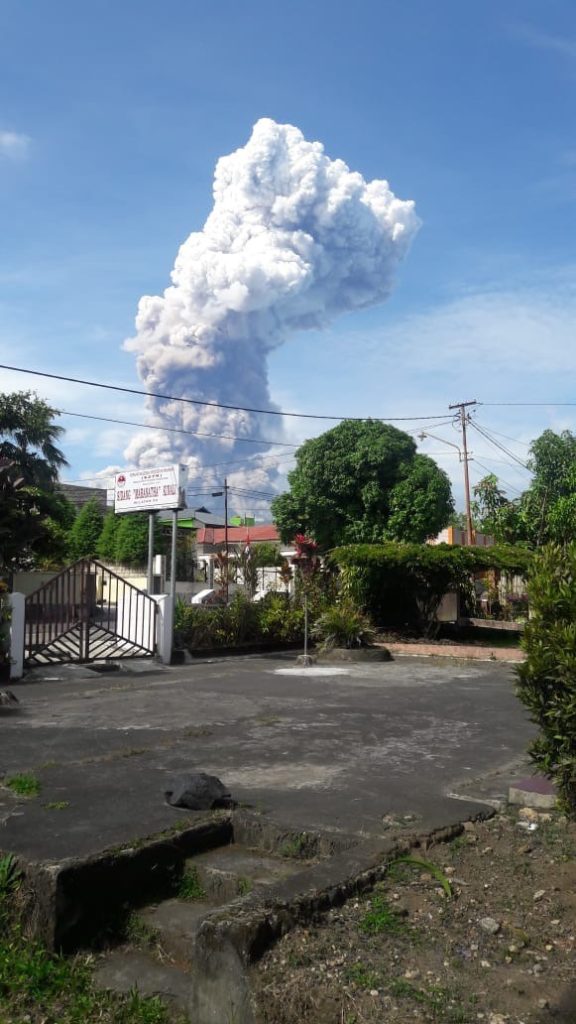 Sulawesi – An earthquake, then a Tsunami and now a new volcano eruption – even as the child of infamous Krakatoa remains active for the past few weeks.

Volcano Anak Krakatoa – known as the ‘child’ of infamous volcano Krakatoa that killed 36,000 in 1883 – has been active for several weeks and is being watched closely.

The eruption comes less than a week after a devastating 7.4 earthquake and towering Tsunami killed over 1400 people around Palu on the same island.

Authorities said a further 211 bodies are to be put aboard 15 trucks for shipment to mass burial grounds. Hundreds have been buried in an earlier mass burial.

“Soputan Mountain Observation Post reported that the height of the volcanic ash column was observed around 4,000 meters above the crater peak or 5,809 metres above sea level,” the national disaster management agency BNPB reported.

“The ash column with strong pressure was observed to be gray to brown with a thick intensity leaning west and northwest. This eruption is recorded on a seismogram with a maximum amplitude of 39 mm and a duration of about 6 minutes.”

“Volcanic ash rain is estimated to fall in the area in the northwest-northwest of Mount Soputan.”

Sutopo Purwo Nugroho, spokesman for the organization said it’s not expected to interfere with a nearby airport but activity within a 4 kilometre zone is prohibited.

He said Mount Soputan is in Status Level III (Standby) warning with a recommendation: The community should not be active in all areas within a 4 km radius of the peak of Mount Soputan.

Activity is barred for 6.5 kilometres in the west -southwest direction from the crater to avoid any potential lava flow or hot clouds.

“Communities around Mount Soputan are advised to prepare a mask covering the nose and mouth, in order to anticipate the potential danger of respiratory problems if there is rain of ash.

“The community must be aware of the potential threat of lava flows that can occur after the eruption, where the eruption material is carried by water, especially in the rivers upstream around the slopes of Mount Soputan, such as Ranowangko River, Lawian River, Popang River and Londola Kelewahu.

“People are encouraged to remain calm.”

There are no reports of damage at this time. There are no settlements within the 4 kilometre exclusion zone.

Authorities say they are monitoring the child of Krakatoa because of continuing activity. See below :

“Mount child of (Anak) Krakatoa erupted almost daily. On 2/10/2018 it happened 156 times eruptions threw sand and ash, incandescent lava. The Status Of The Alert. The condition is safe if it is outside the radius of 2 km from the crater. Interesting to see the tourist phenomenon of the eruption in a safe place,” said Sutopo Purwo Nugroho.