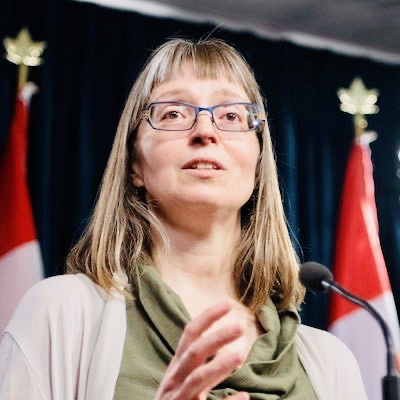 Edmonton – Alberta is facing a Covid-19 tsunami with 120 new cases, a total not seen since the height of the pandemic on May 2.

“We’ve conducted more than 8,200 new tests, and unfortunately we have identified 120 additional cases in the province, which is up significantly from yesterday.

“This is the first time since May 2 that we’ve identified more than 100 new cases in a single day,” Alberta PHO Dr. Deena Hinshaw said.

There have been two more deaths.

Hospitalization are up from yesterday and rising from lows reached during phase 1 of opening.

69 people are in hospital with 8 in ICU.

“In addition, we have added three new regions to the watch list, bringing the total number to seven.

“These regions are all being monitored closely and no additional measures are being taken at this time,” said Hinshaw.

These regions including central Calgary can face more restrictions depending on how high they go in the zone.

“While we have additional cases I want to speak about something that has been especially difficult. This pandemic has been very very challenging for residents in continuing care facilities.”

“To date, 119 of 165 deaths in Alberta have been residents in these facilities.”

Hinshaw also took up the issue of harassment of park staff.

“I also want to remind us all that those who have responsibility for keeping us safe, like provincial parks staff, should be treated with respect when they are doing their job.

“I have heard reports that over last weekend, in several provincial parks, these parks staff were subjected to verbal abuse and aggressive behaviours at places like Gull Lake, Kananaskis, and Wabamun when they did their job to enforce public safety measures.

“This is not how to treat people who are doing their part to keep our parks as safe and healthy places to visit.”

• 120 additional cases have been identified in the last 24 hours and the total number of active cases is now 807.

• Cases have been identified in all zones across the province:

• There are 39 active cases and 758 recovered cases at continuing care facilities; 119 facility residents have died.