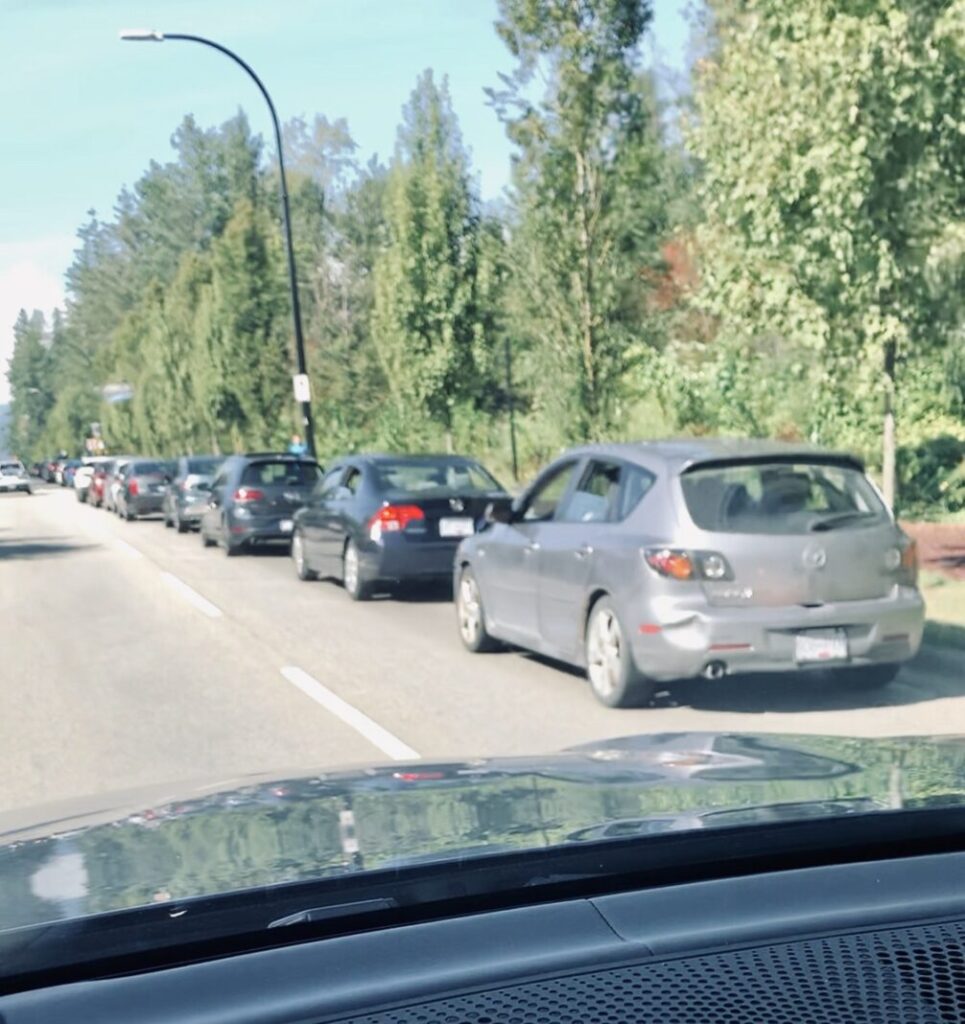 Vancouver – Lower Mainland area testing stations turned away people with Covid-19 symptoms, some centres closed early while people with fever lined up for three hours to get a test.

Central Park station closed several hours early on Sunday and people feeling ill had to run around looking for a test.

The episodes raise questions about BC’s ability to test members of the public despite assurances by Dr. Bonnie Henry that BC has capacity to test 7,700 people. Less than half of that capacity has been used in past few days.

A woman in her 30s interviewed by Vancouverite said she first went to Central Park but was turned away.

Her friend said she left the Esplanade testing station because there were 40 people ahead of her and each person was taking 15 minutes to complete the swab test.

Testing station crowds have grown as the Vancouver and Fraser region face an explosion of Covid-19 cases and community spread continues. On Friday BC reported 84 new cases and 629 active cases, a number that has exploded in recent days.

“I went to the Central Park location to get tested for covid and at 12:45 they told us they are at full capacity,” said a woman suffering from a sore throat and fever.

She’s part of a group of ten friends who have refrained from gathering since March but took a boat tour last weekend to celebrate a friend’s birthday.

Now four have symptoms and one has tested positive.

She said Central Park turned her away even though the hours of operation are 12 to 6 p.m.

“The Hornby location was at full capacity around the same time … We ended up going to Esplanade and the line up was about 3 hours,” she said in an interview.

“We were very surprised to see that the locations were at full capacity given the number of people they were turning away.”

The pattern of turning away people who are convinced they have Covid-19 has escalated since the outbreaks grew.

BC is isolating almost 1,900 people and active cases have climbed back to levels not seen since April.

Positivity in tests has gone up as well and care facility outbreaks have suddenly grown to ten.

We’ve asked health authorities why stations don’t have better capacity to test. We are awaiting an answer.

#bcpoli. This is not just any video. This is Covideo. The lineup at Central Park Covid-19 testing station continues to build. This could be trouble for our escalating numbers. Closes at 6 p.m. ⁦@ybrend⁩ ⁦@CTVVancouver⁩ ⁦@Bernardo1130⁩ ⁦ @ctv_michele⁩ pic.twitter.com/w2jUcGhALT

On Wednesday last week the Central Park station posted a large sign saying the site was closed. There’s a rush to get tested but people we interviewed are frustrated at lack of capacity.

“I have everything apart from shortness of breath…fever, sore throat and headache,” said the woman who wanted her privacy protected.

“I got tested today at Esplanade but i had a hard time finding a location that was not at full capacity,” she added.

Two other friends were not able to get a test. Both were on the boat tour and have symptoms. 6 friends remain very concerned.

“I thought it was a simple cold. And I developed a fever last night. So I went to get tested because my friend got his results today and he’s positive.”

She said members of her group are startled by how contagious Covid-19 is.

“it is funny we are a super cautious group and this was the only time we got together since march,” she said. The group did not mask on the boat they boarded at the Plaza of Nations.

“I dont even know how we got it … like we are all super catious and a bit paranoid wore masks all the time,”

“This was the only get together we had ever since march … so this thing (Covid-19 spread) is ramping up.”

“Just this one time we were not masking thinking we were outdoors.”

“10 of us went boating last weekend for a friends bday. All of us people who work from home and have been very self conscious of this virus,” said another friend

“A few of the people have had mild cold symptoms the last 3 days so they went to get tested. One of them just came back positive.

“I went to try to get tested at the esplanade location around 12:30. There were around 40 people in front of me and the line was moving extremely slow. ( one person moved in 15 mins) We were all standing outside but I got nervous and left.

“I will be trying the drive through first thing tomorrow,” she said.

“This does make me think the virus is circulating in BC much more than they’re telling us and there’s a lot of community spread in lower mainland.”

Others have complained online about wait times and lineups.

Before 12:10 people were being handed a note to bring back later, same as last week when we went for testing ourselves. I think they have to do it. Can you imagine Boundary and 49th if there was no other way to get in than waiting in that line?