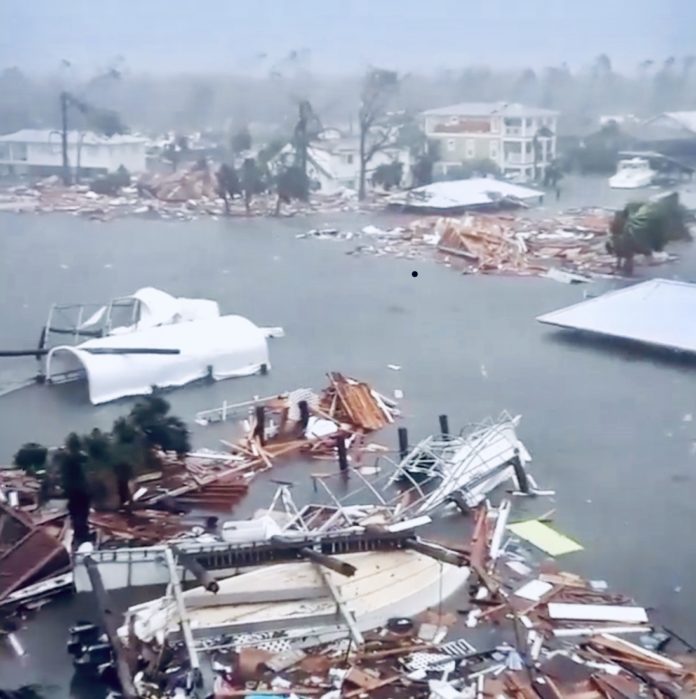 Update: Hurricane Michael has stormed on to the Florida panhandle with winds of 155 mph causing widespread devastation.

Panama City, FL – Hurricane Michael packing winds of 145 mph is being dubbed the storm of the century and the first effects are already being felt in the Florida panhandle.

Gov. Rick Scott said it’s time to hunker down if you’ve not evacuated.

“The time for evacuating along the coast has come and gone. First responders will not be able to come out in the middle of the storm. If you chose to stay in an evacuation zone, you must SEEK REFUGE IMMEDIATELY,” he warned.

“This is the worst storm that the Florida  Panhandle has seen in over a century. I cannot stress enough, no matter where you are in the Panhandle, it is time to find shelter,” he added.

The National Hurricane Centre said at 8 am CDT: “Water levels are rising and winds increasing along the Florida Panhandle as potentially catastrophic Michael approaches.”

The eye of the storm is about 80 miles south south-west of Panama City on the western side of Florida with sustained winds of 145 mph winds. The massive storm is strengthening as it approaches land and is a category 4 hurricane.

One of the biggest fears is a massive storm surge followed by flooding. Already some areas are under 4 feet of water. 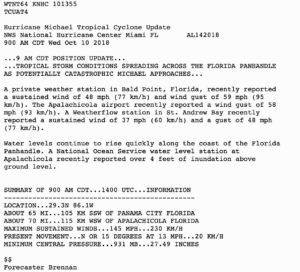 “A Storm Surge Warning remains in effect for much of the Florida Panhandle and Big Bend region, where life-threatening storm surge is expected today. Storm surge inundation could reach 9 to 13 feet above ground level between Tyndall Air Force Base and Keaton Beach FL.” the hurricane centre said.

Water was rising fast in some areas with residents rapidly scrambling out as this one woman tweeted. FEMA sent some last minute advice to people who experience flooding.

We just left our home, for higher ground! It’s really not looking good for us. We all need you’re prayers!🙏🏻 God Blessed-|- pic.twitter.com/G2yBVAcoOw

OK! The water is rising and we’re getting ready to evacuate. They’re saying 10/13feet of water, if so our new home is ruined!😔 but, as long as we have our lives, we can rebuild.🙏🏻 keep us all in you’re prayers. Thank you!💖 pic.twitter.com/L34RDuwNRC

Paradise fire toll is 29 – equalling deadliest blaze ever in...